Origins
The early origins of the North Shore Canoe Club date back to the late 1950’s. In 1957 a disgruntled group of canoeists left the Auckland Canoe Club to establish an informal canoeing group called the OBCC (Our Bloody Canoe Club)! Some members of this group of future North Shore Canoe Club members were Joan & Brian Hetherington, Eric Holdroyd, Frank Smart, Gerald Maire and Mack McNaney. In 1958, the group became the Tainui Canoe Club and attended the first New Zealand Canoeing Association’s Flatwater National Championships in Gisborne where Joan Hetherington became the first women’s K1 flatwater and Slalom Champion. In 1959, Gerald Maire, with a group of independent North Shore canoeists formed the Olympic Canoe Club dedicated to flatwater racing. Up to that point, neither club had clubrooms, but met at various members’ homes and paddled on rivers, estuaries and the sea.

In 1960, the Devonport Cable Wharf shed became available to rent, the Olympic and Tainui Canoe Clubs merged to become the North Shore Canoe and Youth Club and the new Club took up residence. Gerald Maire had imported New Zealand’s first fiberglass K1 from Australia and in 1961 took a mold and began building the club’s first fleet of 19 K1 racing kayaks. This accelerated modern racing kayaks from the ply K1’s and K2’s which had been built to Olympic specs used at that time. 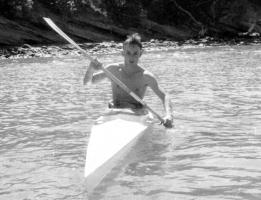 The Club’s First Newsletter
Vol. 1 No. 1 March 1962. A far cry from today’s website and emailed newsletters, but still the same message – volunteer help please! During this period Mack McNaney became the Club’s first Life Member in recognition of his pioneering efforts. 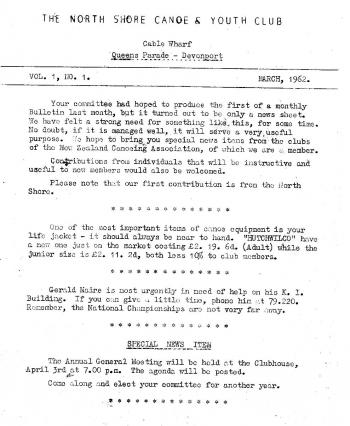 Racing
With the move to Lake Pupuke, and during the years 1963-1973 , the Club was enthusiastically involved in any and all racing on offer. Not just local and National flatwater regattas were supported, but also river races in New Zealand (Waikato and Wanganui), in Australia (Murray & Hawkesbury River Races), and in the United Kingdom (Westminster to Devizes). Many of these river races were 100 – 150miles, over one, two or more days. Alongside this was a major effort and programme aimed at getting the first flatwater canoeist away to the Olympics. This was achieved in 1972 when Don Cooper from the North Shore and Tom Dooney from Palmerston North attended the Munich Olympic Games along with Bernard Fletcher as Manager.

New Clubrooms
The North Shore Council ultimately allocated long term land on the present site to both North Shore Canoe Club and North Shore Rowing Club and the clubhouse as it is today was completed in 1973. This was a huge project lead by builder/club member John Archer who later was awarded life membership of the Club for his efforts. But there were many others, some already mentioned, but also Renton Hunger and Fred Thomas, Mayor of Takapuna, who became the Club’s Patron until his retirement in 1985. Fundraising for the Club’s building was a major commitment. It is recalled that tireless fundraiser Gary Millar all but sacrificed his life to the cause when cutting into a 44 gallon drum with an acetylene torch during the ‘garden incinerator manufacturing project’, the drum still contained some of its flammable solvent! It is uncertain whether the resulting explosion had Gary bound for heaven or hell, but in recognition of his incredible efforts for the club, observers at least agreed to give him the benefit of the doubt!

Golden Years
Flatwater racing blossomed at the Club through the 1970’s and 90’s, with many North Shore Canoe Club members becoming National Champions, Olympians and Olympic Champions. The achievements of Ian Ferguson and Paul MacDonald in particular are now legendary in the New Zealand sporting arena, and they became Life Members of the Club in 1994. During the 1980’s and 90’s other paddling and competition was alive and well within the Club. Gary Millar was instrumental in resurrecting the Auckland Provincial Canoe Committee’s Long Distance River Races by building a fleet of TK2 racing kayaks. Dennis Rae and Gerrie Maire rebuilt declining memberships by running 6 week canoe skills courses for certifying Coast to Coast athletes in which Club membership was part of the fee. These projects introduced many new long term members, some of whom went on to take up executive and committee positions for many years within the Club. During this time also, at Council’s encouragement the Club entered into an agreement with Neptune’s Dive Club to renovate and share ownership of the upstairs facilities. Also at this time (1982/1983) some enthusiastic members of the North Shore Canoe Club  introduced Dragon Boat racing to New Zealand based originally around Maori Waka’s. This division of the Club was called Wakatete Racing, and many members raced internationally – mainly in Hong Kong.

Into the new millennium, the Club continued as New Zealand’s leading kayak racing club. Between 2000 - 2016, numerous Olympians have made the North Shore Canoe Club their training home.
These have included:

Looking Ahead
There are always challenges; continuing refurbishment and upkeep of the Club. The Club has always been privileged to have strong leadership from among members prepared to ensure the continuing encouragement and support of the Club’s membership, the paddling and coaching within the Club, security and upkeep of the Club facility and protecting the Club’s history and future. But these things cannot be taken for granted. Future committees must competently organise and promote the sport across a wide spectrum and members must enthusiastically support and participate in these Club initiatives. This will surely safe vouch the Club for another millennium yet.